Over the years, Juan Martin del Potro has grown into one of the US Open’s most beloved figures, a gentle giant of a man who has openly embraced the New York faithful, just as they have adopted him as one of their own.

The roots of that connection date back to 2009, when the Argentine rolled to his first and, to date, only Grand Slam title – a magical romp punctuated by a spectacular final.

While, to many, his major breakthrough seemed to come out of the blue, del Potro was a well-established presence by that year’s Open. He finished 2008 ranked in the Top 10, buoyed by a run to the quarterfinals in Flushing Meadows and four tour titles – including victories at the US Open Series events in Los Angeles and Washington, D.C. He continued his ascent in 2009, posting a victory at the Australian Open tune-up in Auckland and another in Washington, both on hard courts, in addition to reaching the quarterfinals at the Australian Open and the semis at Roland Garros.

And then there was his game. Tennis had, in the 21st century, moved more and more toward the power dynamic, with baseliners blasting away at previously unconscionable speeds. Del Potro was on a different level from even those bashers. He was an immense presence – an imposing 6-foot-7, earning him the nickname the Tower of Tandil, after his hometown in Argentina – a size that belied his approachable, likable demeanor. And his strokes were heavy and flat, a thundering thud off both wings that distinguished him from the day’s prevailing top-spinners. 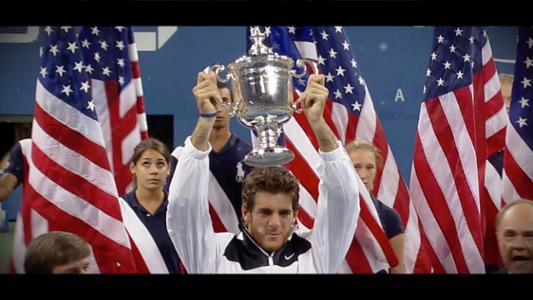 For the 2009 Flushing fortnight, he utilized this repertory to incredible effect. He dispatched four current or future Grand Slam champions en route to the crown, sneaking into title contention with a straight-sets victory over 2003 finalist Juan Carlos Ferrero in the fourth round and announcing his presence with an impressive four-set win over Marin Cilic in the quarterfinals.

Del Potro reserved his finest for the biggest occasion: Finals Weekend. In a stunning display of power tennis, he blitzed No. 3 seed Rafael Nadal in the semifinals, 6-2, 6-2, 6-2, turning a highly anticipated encounter into a rout. And then, in the final, he brought a dead stop to top seed Roger Federer’s 40-match US Open winning streak, rallying from two-sets-to-one down and dominating the all-time great in crunch time to emerge with an improbable, though thoroughly deserved, 3-6, 7-6, 4-6, 7-6, 6-2 victory.

A cavalcade of injuries have slowed del Potro in the years since, surely denying him many Grand Slam title opportunities, but he remains a contender. As evidence, look no further than his remarkable comeback to defeat Dominic Thiem at the 2017 US Open, a victory backed up by another upset of Federer. And if anything, his struggles to overcome the setbacks have only strengthened his bond with the New York partisans.

A second US Open title would surely cement del Potro’s place in the record books. But those who watched his brilliant run in 2009 need no reminder of his greatness.

50 Fact: With his two victories on 2009 Finals Weekend, del Potro became the first player ever to defeat both Nadal and Federer in the same Grand Slam event and just the second to beat the two all-time greats back to back, following Novak Djokovic, who accomplished the feat in Montreal in 2007. To this day, Djokovic is the only other player to score consecutive victories over Nadal and Federer at a major, having done so en route to the 2011 US Open title.