This year, as we celebrate the 50th anniversary of the US Open, we’re counting down the 50 most memorable moments in the history of America’s Grand Slam. Today, we take a look back at No. 39.

Although Roger Federer had already ruled on the lawns of Wimbledon twice as he approached the US Open of 2004, he had not yet prevailed even once on the hard courts of the USTA Billie Jean King National Tennis Center.

In four previous appearances in New York, he had failed to progress beyond the round of 16. But the Swiss maestro was determined to display his singularly dazzling brand of tennis in Flushing Meadows.

In the quarterfinals that year, Federer somehow survived a two-day, five-set quarterfinal confrontation against Andre Agassi, concluding with winds so fierce that the two combatants were demonstrably mediocre at times.

Once he got to the final, however, the conditions were calm, the situation was right, and Federer was implacable. He cast aside 2001 champion Lleyton Hewitt with a virtuoso performance, gaining a 6-0, 7-6, 6-0 victory with a sweepingly beautiful shotmaking display. 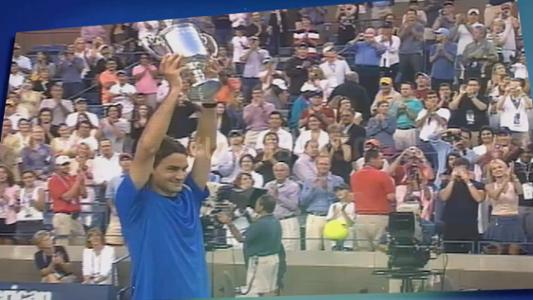 His opening set was masterful, as the 23-year-old swept 24 of 29 points. Federer had at last found his rhythm and revealed his best at the US Open as he won his first title.

“Federer has this incredible knack for playing great shots whenever he needed them, and that reminds me of Rod Laver, Bjorn Borg and Pete Sampras," 1971 US Open champion Stan Smith said minutes after Federer overwhelmed Hewitt. "To beat Lleyton so decisively the way Hewitt had been playing was a great credit to Roger.”

Federer would not lose again in New York until the 2009 final against Juan Martin del Potro, securing 27 match victories in a row before the towering Argentine cut him down in five tumultuous sets.

He eclipsed Agassi, Andy Roddick, Novak Djokovic and Andy Murray in the 2005-08 US Open finals, but arguably Roger Federer was never better in a title-round contest than he was versus Hewitt in 2004.