Born and raised on the Southern California hard courts and maximizing his 6-foot-4 frame, Stan Smith was the prototype serve-and-volley player.

In the summer of 1971, Smith reached the pinnacle of tennis by reaching the Wimbledon and US Open finals. After suffering a tough five-set loss to John Newcombe in the Wimbledon final, two months later, the No. 2-seeded Smith met spunky unseeded Jan Kodes in the US Open final at the West Side Tennis Club in Forest Hills.

Underneath a floppy Australian tennis hat, Smith powered through his Czech opponent, 3-6, 6-3, 6-2, 7-6, finishing the match with an emphatic overhead winner and then a jubilant leap over the net for his first major singles crown.

Smith’s path to the final was highlighted by a five-set win over 1968 finalist Tom Okker in the semifinals. His four-set victory over Kodes in the final was the first US Open championship to end in a tiebreak. 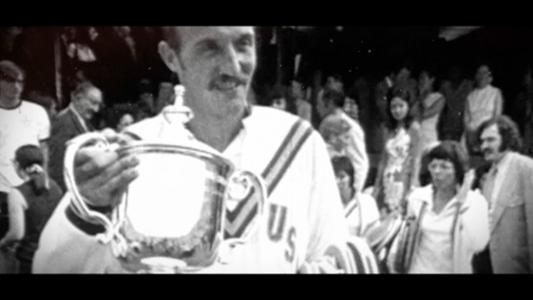 The following year, Smith beat Ilie Nastase in the Wimbledon final for his second and last Grand Slam singles title.

Playing in an era when all the top stars competed in both singles and doubles, Smith was one of the best. Teaming with longtime partner Bob Lutz, the pair won four US Open doubles titles, in 1968, 1974, 1978 and 1980.

Calm, cool and collected and barely registering any emotion on the court, Smith won 37 career singles titles and 53 doubles crowns during his career. He was ranked No. 1 in the world in 1972, winning nine titles that season, and was a Davis Cup stalwart and member of seven championship teams. He was inducted into the International Tennis Hall of Fame in 1987.

50 Fact: While today’s generation of tennis fans missed out on seeing Smith play and might not be familiar with his career, they still know his name through his ever-popular namesake adidas sneakers. Now worn for casual wear and not tennis, they remain today one of the most popular sneakers on the market.

To hear an in-depth interview with Stan Smith, listen to "Courtside: The Official Podcast of the US Open."