50 Moments That Mattered: Orantes makes comeback of all comebacks

This year, as we celebrate the 50th anniversary of the US Open, we’re counting down the 50 most memorable moments in the history of America’s Grand Slam. Today, we take a look back at No. 40.

When the US Open changed surfaces from grass to Har-Tru back in the summer of 1975, the move to clay created an opening for the best of the European clay-court breed. One fellow who always figured to flourish on the dirt was none other than Spain’s stylish Manuel Orantes, a crafty left-hander who thrived in such a setting.

Orantes was at his zenith on his favorite surface at the West Side Tennis Club in Forest Hills. He cast aside the enormously gifted Ilie Nastase in the quarterfinals and then collided with fellow southpaw Guillermo Vilas in the penultimate round. They fought ferociously through the evening, with the Argentinian frequently on the edge of victory.

Vilas captured the first two sets, dropped the third, then established a 5-0 lead in the fourth set. All but his most diehard supporters thought Orantes had no chance to recover. But he erased three match points against him in the sixth game and two more in the seventh. 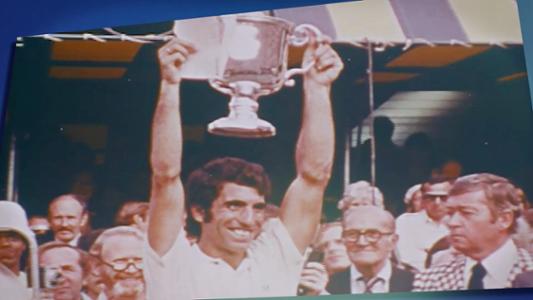 Somehow he took the fourth set on a run of seven consecutive games, and eventually he came through astonishingly, 4-6, 1-6, 6-2, 7-5, 6-4. He saved all of the match points with audacious shotmaking, explaining later, “I had to go for winners on the match points. It’s no good being defensive when you are so far behind.”

Orantes concluded that triumph at 10:35 in the evening. He had a late meal, did not get to sleep until the middle of the night, but the next afternoon he shook the tennis world by routing defending champion Jimmy Connors in straight sets to claim the lone major title of his career.

Many tennis enthusiasts would remember his masterpiece of clay-court wizardry against Connors, but his win over Vilas was the defining moment of his career and one of the greatest comebacks ever recorded at a major tennis tournament.