This year, as we celebrate the 50th anniversary of the US Open, we’re counting down the 50 most memorable moments in the history of America’s Grand Slam. Today, we take a look back at No. 41.

Stefan Edberg entered the 1992 US Open as the defending champion. A record 22 hours and 22 minutes of play later, he left with his second New York title and the world No. 1 ranking in hand, managing a trio of fifth-set escapes on the way.

A “chaotic” second week, to use Edberg’s understated term, required him to play nearly 18 hours and 203 games over the course of four matches against Top 15-seeded opponents, including 13 hours over the final four consecutive days.

Edberg’s total time on court was a record, as were his 981 net attacks throughout the tournament, according to a French publication of Tennis Magazine that aptly described his US Open journey as “from hell to heaven.”

It was the perfect phrase to describe the then-26-year-old’s hellacious run in New York, when he toiled through three consecutive five-setters to set up a final encounter against fan-favorite Pete Sampras. In each of those five-set battles, Edberg fought back from a break down in the decider, as he outlasted No. 15 Richard Krajicek, No. 9 Ivan Lendl and No. 4 Michael Chang.

For all the heroics, it was the semifinal against Chang – the longest match ever played at the US Open – that continues to be remembered as one of the great matches in tournament history. The Saturday showdown was Edberg’s third day of competition in a row, after his rain-interrupted quarterfinal with Ivan Lendl spilled over into a second day. It was the fourth of five career Slam meetings for Edberg and Chang, the first coming in the 1989 French Open final, when a 17-year-old Chang emerged as the youngest-ever men’s Grand Slam champion – a record he still holds.

Across five hours and 26 minutes, the two Hall of Famers traded 23 breaks of serve in a topsy-turvy affair that neither man could gain command of until the American ripped off five games in a row from 5-5 in the fourth set. Returning serve with a 3-0 fifth-set lead, Chang earned two break points to put a vise grip on the match.

But as in his two previous matches, Edberg began to fight his way out of the corner. Still a break down at 2-4, the Swede won 12 of 13 points, breaking twice at love for an opportunity to serve for the match at 5-4. 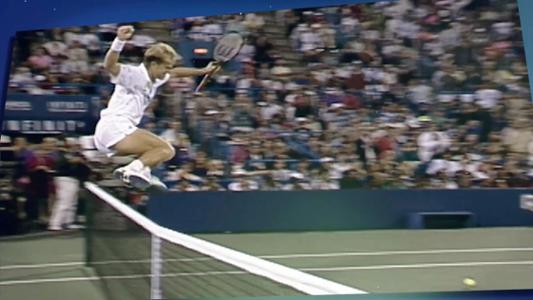 Fittingly, the final game would not come easy. A last-gasp charge gave Chang a break point, but Edberg coolly saved it with a backhand-volley winner, one of his 144 successful net approaches on the day. Finally, an unreturned serve sealed the Swede’s historic victory, 6-7, 7-5, 7-6, 5-7, 6-4.

“It was really something today,” Edberg was quoted in an AP article produced in the LA Times after the match. “I had chances. He had chances. It was incredible. I didn't have enough on my serve. I was hitting way too many double faults. Maybe I'll feel better tomorrow."

Against all odds, he was indeed better the next day. Unfazed by the five-hour epic, the marathon man recovered in less than 24 hours to defeat Sampras in the final. True to form, Edberg had to come from behind yet again.

Sampras, the No. 3 seed, came out firing and took the first set, 6-3, before the Swede found his footing. After winning set two, Edberg fell behind again in the third, giving Sampras a chance to serve for the set at 5-4. But the Swede would come back to claim the set in a tiebreak, and he quickly raced to a double-break lead in the fourth as Sampras faded. There would be no late drama this time, as Edberg closed out a 6-2 final set.

“The longer the match went on, the better I felt,” he told The New York Times, belying his incredible display of endurance. “Mentally I was feeling very strong.”

It turned out to be Edberg’s sixth and final major title and by far the most dramatic of the two-time year-end No. 1’s career. The US Open was also the site of the Swede’s final Grand Slam appearance in 1996, when he bowed out in the quarterfinals at age 30.

More recently, Edberg coached Roger Federer during the 2014 and 2015 seasons, when the Swiss won 11 tournaments, including three Masters Series events, and reached three Slam finals. For all the records that Federer has broken, his penchant for quick points makes him unlikely to trouble his former coach’s endurance records.

In fact, Edberg’s 22 hours and 22 minutes remains the longest time on court for a Grand Slam champion. That mark is only surpassed by Rafael Nadal, who played for 22 hours and 26 minutes, only to lose to Novak Djokovic in the classic 2012 Australian Open final. The next-longest time belongs to 2012 US Open champion Andy Murray, who needed 21 hours and 51 minutes to claim his first major title.