This year, as we celebrate the 50th anniversary of the US Open, we’re counting down the 50 most memorable moments in the history of America’s Grand Slam. Today, we take a look back at No. 42.

Wimbledon may be known for strawberries and cream, but the 2014 US Open put the cherry on top of the Bryan brothers’ legendary and still unfinished doubles career. In claiming their record-breaking fifth doubles crown in New York, the Bryans hit the century mark for career doubles titles. It was a ground-breaking trophy in more ways than one, as it also extended the duo’s record for most Slam titles (16) and most consecutive seasons with at least one Slam title (10) in men’s doubles.

Though the end result didn’t show it, the Bryans entered New York feeling some pressure. They admitted after the tournament that the milestone 100th title was always in the back of their minds and knew there was no better place than Arthur Ashe Stadium to complete the feat. What’s more, they were mired in a Grand Slam drought by their lofty standards, trophy-less in the past four majors after winning the lot in succession from the 2012 US Open to 2013 Wimbledon.

The Americans’ path to the Sunday final included a pair of three-setters. A 6-2, 4-6, 6-4 quarterfinal win over Spain’s Fernando Verdasco and David Marrero was subsequently followed by a 6-4, 4-6, 6-3 result against Americans Rajeev Ram and Scott Lipsky, with the semifinal match producing one hour and 55 minutes of high-stakes drama, the longest contest of the brothers’ run.

On Sept. 7, the Bryans took to Arthur Ashe Stadium for the final in the day’s opening match, fully understanding the grandeur of the opportunity before them. Marcel Granollers and Marc Lopez provided the opposition, and the No. 11-seeded Spaniards put a scare into the Bryans and the New York crowd early by forcing a pair of first-set break points. But nerves quickly settled on the world’s most famous court, as the Bryans secured a break of their own to take the first set, 6-3, in a tidy 36 minutes.

Set two was another tense affair, but a timely break gave Bob Bryan an opportunity to serve out the match at 5-4. To that point, the Americans had done an impressive job of handling the gravity of the situation, and a big serve on their first match point might have ended matters right there.

“I brought some gas, and I hit it so hard that I didn’t think it was going to come back. I thought it was over,” Bob said in a post-match press conference. 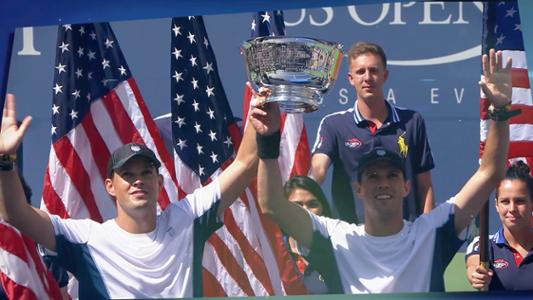 But it did come back, straight at the younger Bryan twin, and a wild shank sent the ball into the stands in the first sign of tension boiling over. It was Mike’s turn on the second match point, and he made no mistake after his brother set him up for a record-clinching volley.

In perhaps their only miscommunication of the day, Mike went up for a trademark chest bump, but Bob stayed grounded and instead lifted his brother in triumph.

“He just felt light as a feather. I could have held him up there all day,” he said.

It was a culmination, though not a conclusion, of a lifetime of sacrifice and dedication that began at the age of 2. As the finish line drew near, Bob spoke of having flashbacks to his whole career.

“I was trying to stay in the moment, but it was impossible. This number right here [100 titles], we have really been looking at it for a couple of years.”

Their competitive journey started in 1985, when the then 6-year-old brothers took home four trophies in their first junior tournament. Similar success followed each step of the way through juniors, a pair of NCAA titles at Stanford and now their unprecedented run at the highest level.

The 100 tour-level titles came in 13 different countries, with 43 coming on American soil, and the 2014 US Open paved the way for their 10th year-end No. 1 finish – you guessed it, yet another record.

Now 39, the Bryans have raised their tally to 114 titles as a pair, with the most recent coming last July at the BB&T Atlanta Open. They retired from Davis Cup play in 2017 but show no signs of stopping on the ATP World Tour, as evidenced by a semifinal run last month at the Australian Open.

The Bryans’ legacy is secure as the most successful men’s doubles team of all time, but no matter how much they add in the future, they will always look back at the 2014 US Open as the 100th jewel in their crown.