This year, as we celebrate the 50th anniversary of the US Open, we’re counting down the 50 most memorable moments in the history of America’s Grand Slam. Today, we take a look back at No. 43.

From early on in his career, Rafael Nadal figured to be one of the game’s greatest players—on clay. In 2005, at just 19 years of age, Nadal knocked out top-seeded Roger Federer in the semis of Roland Garros en route to winning his first major title, becoming just the second man in the history of the French Open to win the event on his first attempt.

Three more consecutive French Open titles followed for the Spaniard before he broke through at another major, first taking the title at Wimbledon in 2008, then finishing on top Down Under, capturing the 2009 Aussie Open crown. But winning the US Open proved elusive. In seven main-draw appearances between 2003-09, Nadal had advanced to the semis in Flushing only twice.

Nadal owned eight Grand Slam singles titles (five French, two Wimbledon and one Australian) by the time he arrived at the US Open in 2010. He’d taken both Roland Garros and Wimbledon that year prior to his Flushing foray. While always the consummate professional between the lines, Nadal, now 24, seemed especially focused in Flushing this year.

Perhaps it was because he’d been hammered in the semis here the year before, straight-setted out of the event, 6-2, 6-2, 6-2, by the eventual champion, Juan Martin del Potro. Perhaps it was because the King of Clay was still so clearly determined to prove that he could be a consistent force on a surface that didn’t stick to his socks. Whatever the reason, Nadal played with a fire and a focus that saw him barrel into his first US Open final without dropping a set. 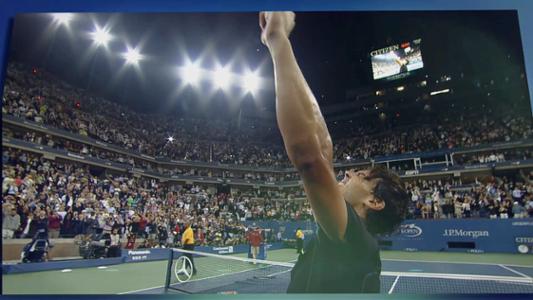 Delayed a day by rain, the Monday final brought top-seeded Nadal up against the No. 3 seed, Novak Djokovic, himself trying to get over a US Open hump of his own. Djokovic, a Flushing finalist in 2007, had reached the semis in both 2008 and 2009, only to be stopped by Federer both times. This year, though, the Serb had defeated Federer in the semis, setting up this final-round showdown between two of the game’s greats, each looking to take his first US Open crown. And the match was as brilliant as it was billed—the sort of heavyweight slugfest that usually has ropes around it.

Across three hours and 42 minutes—not including a rain delay of nearly two hours—the match played out; a brilliant blend of lengthy, bruising rallies, incredible winners and impossible saves, and splendid shot-making from both sides of the net. Nadal took some punches, but his steely determination to win never wavered. Through one stretch of the match, the Spaniard played 40 consecutive points without making an unforced error.

For the first time in the tournament, Nadal lost a set, but he never lost his focus. And shortly after 10 p.m. on that humid Monday evening, Djokovic pushed a forehand wide, and Nadal collapsed to the court, having secured the 6-4, 5-7, 6-4, 6-2 win to claim his first US Open crown and complete a career Grand Slam—the youngest man in the Open era to capture all four majors. The win also made Nadal the first player to win the French, Wimbledon and the US Open since Rod Laver in 1969 – and the first to do so on three different surfaces.

“I think for the first time in my career I played a very, very good match in this tournament,” Nadal said after the win. “That's my feeling, no? I played my best match in the US Open at the most important moment, so I am very, very happy for that, for sure.”