One of the most exciting players of her generation, Spain’s Arantxa Sánchez Vicario had a reputation on tour for her feisty spirit and never-say-die attitude. The 5-foot-6 native of Barcelona always attempted to chase down every ball on the court, thus earning her the nickname “Barcelona Bumblebee” from legendary tennis journalist Bud Collins.

Sánchez Vicario grew up playing tennis on European red clay courts but adapted her game to all surfaces, developing from a fierce baseliner to an astute player at the net. While she won three of her four major singles titles on the red clay of Roland Garros, she had success at every Grand Slam tournament, reaching finals at all four majors, including two at the US Open.

At the Open, the Spaniard reached her first singles final at the age of 20 in 1992, defeating world No. 2 Steffi Graf in the quarterfinals before falling to No. 1 Monica Seles in the championship match. She reached the final again two years later and went one step further, becoming the first woman from Spain to win the US Open women’s singles title in the 108-year history of the event. 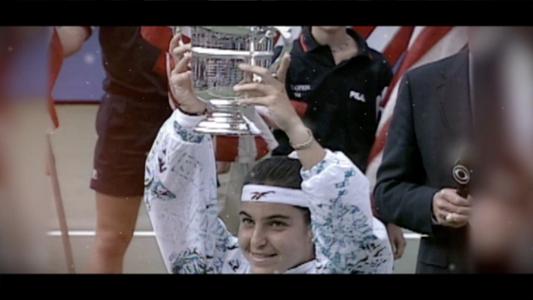 Sánchez Vicario entered the 1994 Open as the No. 2 player in the world and the reigning French Open champion. She notched straight-set wins in her first six matches, including victories over No. 5 seed Kimiko Date in the quarterfinals and No. 8 Gabriela Sabatini, the 1990 champion, in the semifinals. She took on world No. 1 Steffi Graf in the final, where she battled back from losing the first set to stun the top-seeded German, 1-6, 7-6, 6-4 – a win all the more impressive because Graf had compiled a 57-4 record heading into the final and had won seven titles already that year.

Sánchez Vicario, who also won the women’s doubles title with partner Jana Novotna at the 1994 Open, competed at Flushing Meadows 16 consecutive years, from 1987 through 2002, and advanced to the fourth round or better 13 times.

50 Fact: Besides winning the women’s singles and doubles titles at the US Open in 1994, Sánchez Vicario also took home two other trophies in New York during her career. She teamed with Czech Helena Suková to capture the women’s doubles title in 1993 and with American Jared Palmer to claim the mixed doubles championship in 2000.