For a three-year stretch, from 1975-77, the US Open was contested on clay, the soft stuff a stopgap between the tournament’s lengthy history on grass and its current course on cement.  For those three years, the very nature of the tournament changed, as the slow surface favored the legion of European and South American baseliners over those who preferred playing within shouting distance of the net.

And so it was in that first year of US Open clay-court competition that one of the game’s greatest grinders—Spain’s Manuel Orantes—finished first at Forest Hills, playing his way to the title with a game that showcased equal amounts of grit, guts and gallantry and included one of the greatest comebacks in the history of the event.

A finalist at Roland Garros the year before, the 26-year-old Orantes was seeded third at Forest Hills in 1975. After taking out Ilie Nastase in the quarters, Orantes came up against another splendid soft-court player—Guillermo Vilas—in the semis. In that match, the Argentine raced out to a two-sets-to-none lead before Orantes found his feet and took the third. But after falling behind 0-5 in the fourth, the Spaniard seemed headed for the exit. 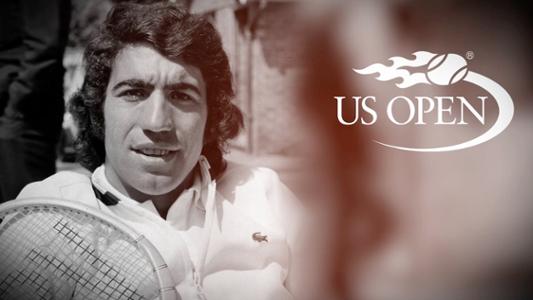 Only he wasn’t. Instead, Orantes dug deep, rallying all the way back, saving five match points against him in sweeping the next seven games, before taking the fifth set to complete a remarkable 4-6, 1-6, 6-2, 7-5, 6-4 win that played out over 3 hours, 44 minutes, finishing under the new lights of the old stadium at 10:40 p.m.

After that marathon, few figured Orantes would have enough left in the tank to top defending US Open champ Jimmy Connors in the final, but employing a brilliant blend of splendid shot-making, the Spaniard out-slugged one of the game’s best battlers, planting the top seed in the stadium’s soft floor with a 6-4, 6-3, 6-3 win to capture his only career Grand Slam title.

50 Fact: Of the Spaniard’s 36 career singles titles, only five were won on a surface other than clay.