This year, as we celebrate the 50th anniversary of the US Open, we’re counting down the 50 most memorable moments in the history of America’s Grand Slam. Today, we take a look back at No. 45.

On Aug. 25, 1997, tennis legend Althea Gibson turned 70. Coincidentally, it was also the date that another female tennis legend began her campaign in her first US Open. Her name was Venus Williams.

Entering the tournament, the then-17-year-old was unseeded and a relative unknown. Williams had turned pro three years earlier and, unlike most of her peers, had very little experience competing on the junior circuit. Instead, the majority of her training and play was spent on the public courts in Compton, Calif., where her father Richard spent hours drilling Venus and her younger sister Serena. It certainly was not the typical training regimen to which most players were accustomed.

Heading into the Open that year, Venus had played only 18 WTA tournaments in her career. She made her Grand Slam debut at the French Open and Wimbledon earlier in 1997, and the US Open would be her third major tournament overall. She was unseeded and ranked No. 66 in the world.

Williams played her first match in Flushing Meadows against Larisa Neiland of Latvia in the newly opened Arthur Ashe Stadium. Although nerves got the best of the rising American star in the opening set, she settled down soon after and won, 5-7, 6-0, 6-1.

From there, Venus cruised through the draw, posting straight-set wins against each of her next four opponents, including No. 8 seed Anke Huber in the third round and world No. 17 Sandrine Testud in the quarterfinals. She also defeated No. 11 seed Irina Spirlea, 7-6, 4-6, 7-6, in a semifinal thriller, in which she fought off two match points – one with a down-the-line backhand pass that is considered one of the most remarkable shots in US Open history.

Next up was world No. 1 and top seed Martina Hingis in what would be the youngest Grand Slam final in the Open era. 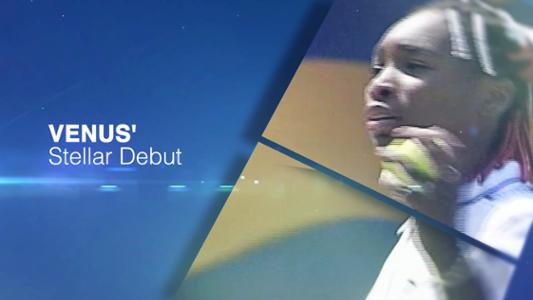 Hingis, 16, was having a career year in 1997 and had already won two major titles – the Australian Open and Wimbledon. She continued her outstanding play at the Open, where she dominated each of her opponents en route to the final, failing to drop a set in her first six matches and losing an average of just under four games per match. She used her experience and her versatility in the championship match, as well, defeating Williams, 6-0, 6-4, to claim the title.

Although Williams lost in the final, she made history in her New York debut. She was not only the first rookie to advance to the US Open final since Pam Shriver in 1978, she was also the first unseeded woman to reach the final in the Open era and the first African-American woman to finish runner-up at the tournament since Gibson won the title in 1958.

Venus' performance in her debut US Open was a strong bellwether for success to come. Since competing in her first US Open, Venus has won 49 career titles, amassed nearly $40 million in prize money and has left an indelible legacy in not only the tennis community but the world of sports and beyond.

Williams went on to win two US Open singles titles in 2000 and 2001, but her first US Open run will always be one to remember.