50 Moments that Mattered: Becker battles back from the brink

This year, as we celebrate the 50th anniversary of the US Open, we’re counting down the 50 most memorable moments in the history of America’s Grand Slam. Today, we take a look back at No. 46.

Boris Becker was just 21 when he came to the US Open in 1989, but despite his young age, he already had five major titles on his resume. Becker, who burst upon the tennis scene by winning Wimbledon at 17, was playing here as the No. 2 seed and certainly figured as a favorite to finish first in this Flushing fortnight.

But what figured as a routine second-round outing against journeyman Derrick Rostagno proved to be anything but. Indeed, Rostagno, the laid-back Californian who traveled from tournament to tournament in his Volkswagen van, was in high gear on this day, racing out to a two-sets-to-none lead over his more accomplished opponent.

Becker battled back to take the third, but Rostagno dug deep in the fourth, and, with two match points up 6-4 in the fourth-set tiebreak, seemed on the verge of ending the German’s US Open hopes.

Rostagno lost the first match point with a volley that sailed long, but on the second, he pulled Becker wide with a down-the-line return and charged the net, seemingly in perfect position to bury the volley and win the match. 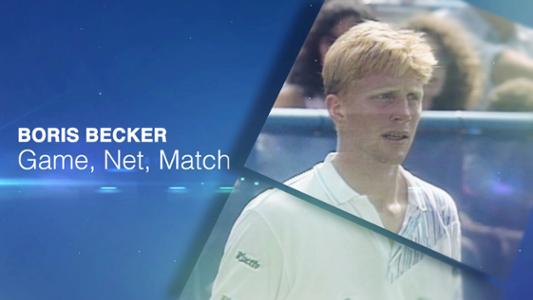 Instead, Becker’s attempt at a forehand passing shot hit the top of the net and bounced straight up, handcuffing the American, who framed the ball wide. Becker went on to win the tiebreak—and then the match—scoring a remarkable 1-6, 6-7, 6-3, 7-6, 6-3 victory, thanks to the net cord heard ‘round the tennis world.

Becker went on to win the US Open that year—his only US Open win in 11 appearances—with a four-set victory over Ivan Lendl. But even after hoisting the trophy, Becker admitted to still thinking about the second-rounder that almost got away.

“Definitely, that helped me,” Becker said. “To win a Grand Slam, you have to come from a match when you're almost out of the tournament. It made me relax more.

“For the last 10 days, that's what I was thinking about all the time.”