In 2001, Lleyton Hewitt was an up-and-coming talent – a 20-year-old Aussie, known for his intense play, mental toughness and screams of “C’mon” that so many of the world’s top pros voice on court today.

Hewitt first cracked the Top 5 of the ATP rankings in the summer of 2001 and entered the US Open that year ranked a career-high No. 4. He had only competed in New York two times previously, reaching the third round in his debut in 1999 and the semifinals in 2000. In 2001, he went one step further, winning his first major title by getting past some of the top players of the day, including one of the greatest in the history of the game.

After outlasting James Blake in five sets in the second round, Hewitt survived another tough challenge from 19-year-old rising star Andy Roddick in the quarterfinals, winning a thrilling five-setter, 6-7, 6-3, 6-4, 3-6, 6-4, in three hours, 40 minutes. He easily took out two-time Grand Slam champion Yevgeny Kafelnikov in the next round, dropping just four games total in his 6-1, 6-2, 6-1 semifinal triumph. And next up was the then-four-time US Open winner Pete Sampras in a battle for the championship.

Sampras, 30, had an incredibly difficult draw in 2001. He had to beat three former US Open champions – Patrick Rafter in the fourth round, Andre Agassi in the quarterfinals and Marat Safin in the semifinals – to reach the final. His win over Agassi is regarded as one of the best matches ever played in US Open history – an instant night-time classic in Arthur Ashe Stadium that went four tiebreak sets, with Sampras winning, 6-7, 7-6, 7-6, 7-6. 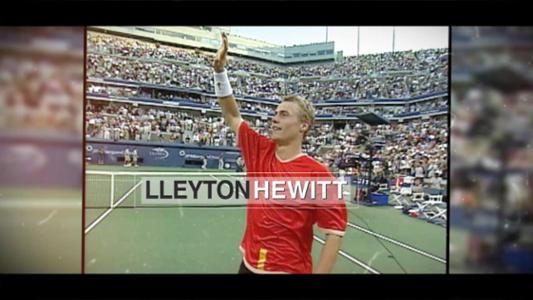 But Sampras’ tough draw and the difficult tournament schedule, in which the semifinals and final were played on back-to-back days, got the best of the veteran American star. He didn’t have the stamina against Hewitt, who, at 10 years younger, was one of the scrappiest players in the game. The Aussie went on to win the championship in straight sets, 7-6, 6-1, 6-1, for the first Grand Slam singles title of his career.

"The kid is so quick it's unbelievable," Sampras said after the match. "I wish I had some of those legs for this old guy. I lost to a great champion. You're going to see this Lleyton Hewitt guy for the next 10 years like you saw me."

Hewitt became the youngest-ever No. 1 player in the world that November and held onto the ATP’s top ranking for 80 weeks. He was the year-end No. 1 in both 2001 and 2002, won Wimbledon in 2002 and capped his career with 30 titles.

50 Fact: Hewitt won his first career Grand Slam title in doubles, teaming with Max Mirnyi to win the men’s doubles championship at the 2000 US Open.