This year, as we celebrate the 50th anniversary of the US Open, we’re counting down the 50 most memorable moments in the history of America’s Grand Slam. Today, we take a look back at No. 48.

A small smile inched across Monica Seles’ face. She closed her eyes and took a series of deep, deliberate breaths.

It wasn’t that she necessarily wanted to smile at that moment, but, with three match points and the New York crowd reaching a deafening volume, Seles almost became a shy teenager again who had fallen in love with the sport for the very first time.

There was so much more to the moment than just a first-round match against Ruxandra Dragomir at the 1995 US Open. Most notably, it was Seles’ first major event, and just second tournament overall, since she was stabbed in the back while playing at a tournament in Hamburg, Germany, in 1993.

It was both the end of one journey – one of reclusiveness, anger and recovery – and the start of another – one of joy, thankfulness and gratitude. So when, on her third match point, Seles stepped inside the baseline and returned a soft second serve cross-court, there was no holding back that smile any longer.

After congratulating Dragomir at the net, Seles ran over to embrace her father and coach, Karolj Seles. She waved to the fans, exhaled once more, tossed towels into the crowd and signed autographs in the first rows behind her chair. As photographers from across the world captured the moment courtside, the 21-year-old joked with one fan that she couldn’t give them her racquet because she needed it for the next match.

For Seles, of course, that ‘next match’ had been a long time coming. 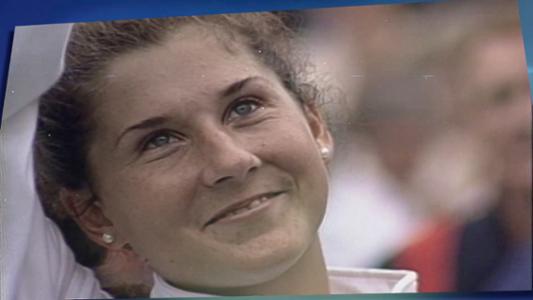 In the late 1980s and early ‘90s, Seles was one of the most promising young players of her generation.

But after being attacked during the match in Hamburg, Seles missed more than two years, returning in the summer of 1995 at an exhibition against Martina Navratilova in the build-up to the Canadian Open – a tournament she won without dropping a set.

The US Open, just her second tournament in 27 months, marked her return to Grand Slam tennis, and there were times when she appeared to not even miss a beat.

She dropped just nine games through the opening three rounds in the stadium court before vanquishing No. 11 seed Anke Huber, No. 5 seed Jana Novotna and fourth-seeded Conchita Martinez – all in straight sets – on her path to the final.

Seles’ remarkable run and inspirational comeback was halted by top seed Steffi Graf, who claimed her fourth title in New York with a 7-6, 0-6, 6-3 win, but there was no denying that Seles’ return was more than a victory in itself – it was the feel-good sports story of the year.