This year, as we celebrate the 50th anniversary of the US Open, we’re counting down the 50 most memorable moments in the history of America’s Grand Slam. Today, we take a look back at No. 49.

They say that history has a way of repeating itself. And for Novak Djokovic in 2010 and 2011, that was particularly true.

In 2010, the Serb played his way into his second US Open final, taking out Roger Federer in the semis, keeping the Swiss from reaching his sixth consecutive final with a brilliant 5-7, 6-1, 5-7, 6-2, 7-5 win in which Djokovic saved two match points. Unfortunately for Djokovic, he lost that 2010 final to Rafael Nadal

The 2011 US Open saw the Serb return to Flushing Meadows red hot, on the heels of capturing both the Australian Open and Wimbledon titles earlier in the year and finally ascending to the world No. 1 ranking that July. With momentun on his side, he was particularly determined to capture his first Flushing Meadows crown. Once again, Djokovic played his way into the semis, and once again, waiting there for him was Federer. 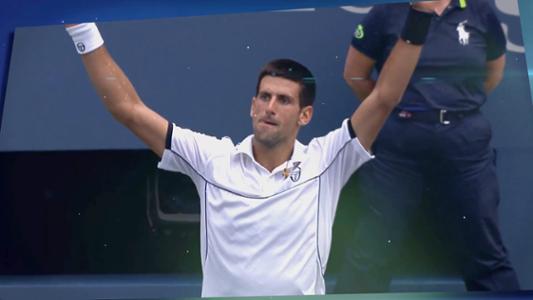 In a match that could best be described as “déjà vu,” the Djoker once again found himself down two match points, at 3-5, in the fifth. But instead of ceding to what could have been a hopeless situation, Djokovic’s tenacity prevailed.

Djokovic sent a stunning cross-court forehand return to the Swiss, saving his first match point when down 40-15.

Federer fed him the second save, making an unforced error on a forehand.

Djokovic became just the sixth player, and fifth man, to win the US Open after being down match point.