Arthur Ashe captured the first US Open men’s championship in 1968, becoming the first African-American man to win a major title.

Ashe was still an amateur in the year that the sport finally decided to throw open its doors to professionals; indeed, U.S. Army Lieutenant Ashe needed to take leave from West Point just to compete in the event.

And compete he did, taking out Roy Emerson in the fourth round, Cliff Drysdale in the quarters, Clark Graebner in the semis and Tom Okker in a thrilling five-set final.

Having won the U.S. National Championships two weeks earlier at Longwood Cricket Club in Boston, Ashe also became the first—and only—man to win the Amateur and Open titles in the same year. 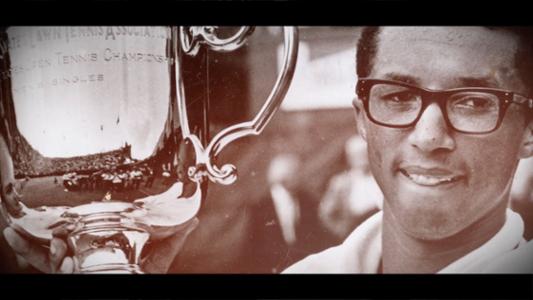 Following his historic win in 1968, Ashe would reach the US Open semis twice more, as well as the final in 1972. In addition, Ashe won both the Australian Open (1970) and Wimbledon (1975) titles, and he was a U.S. Davis Cup stalwart for years as a player and later as captain.

But his on-court achievements were but a slice of his rich and varied life. Before he passed away in 1993, this singular champion dedicated himself to being a champion of causes, from civil rights to education to simple understanding.

Certainly, there are tennis players with more trophies, but there are few who possessed more passion; few who represented themselves or the sport with more grace and dignity than the US Open’s first men’s champion, Arthur Ashe.

50 Fact: Because of his amateur status, Ashe wasn’t eligible to receive the $14,000 first prize at the 1968 US Open—that went to runner-up Okker instead. The history-making champion collected only a $20 per diem for the 14 days of the tournament, departing Forest Hills with a very impressive title, a very nice trophy—and a whopping $280 check.