This year, as we celebrate the 50th anniversary of the US Open, we’re counting down the 50 most memorable moments in the history of America’s Grand Slam. Today, we take a look back at No. 50.

There was no shortage of storylines at the 2009 US Open, but few tales in the Big Apple seemed to sweep American tennis fans off their feet quite like that of Melanie Oudin.

The clichéd phrase ‘Cinderella story’ gains traction whenever a relatively unknown player bursts onto the scene and makes a dream run, but rarely does the shoe fit quite as perfectly as it did for the 17-year-old Georgia native, who quickly became both the talk of the town and the belle of the ball.

In yellow and pink sneakers that featured the word, ‘Believe,’ the teenager captivated the sporting world with a string of remarkable upsets over four top-ranked Russians. If your name ended with -ova or -eva, there was a chance you were on the wrong end of this fairytale story.

Oudin dropped just three games to Anastasia Pavlyuchenkova in the first round before rallying from a set down to stun former Olympic champion and US Open finalist Elena Dementieva, the No. 4 seed, in Round 2.

As global media interest grew, so did the feel-good story of the tournament. London’s Telegraph said that “her life would never be the same again,” and Newsday referred to her as the “US Open sweetheart.” Vendors on-site quickly sold out of their modest selection of Oudin memorabilia as fans clamored for merchandise. 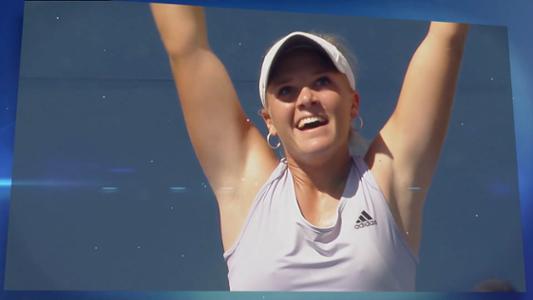 The teen dispatched 2006 champion Maria Sharapova, 3-6, 6-4, 7-5, in the third round and then improved to 4-0 against the Russian contingent with an equally gutsy 1-6, 7-6, 6-3 come-from-behind win against 13th-seeded Nadia Petrova to become the youngest American woman since Serena Williams 10 years earlier to reach the quarterfinals.

The announcer inside Arthur Ashe Stadium dubbed her “America’s newest tennis sensation,” but maybe the most fitting moniker was that bestowed on her by the New York Post: “A 5-foot-6 giant.”

Caroline Wozniacki eventually ended Oudin’s charge in the quarterfinals, but it did little to dampen the spirits of the youngster from Marietta in just her second trip to Flushing Meadows.

At a tournament where Kim Clijsters came out of retirement to win it all and Juan Martin del Potro ended Roger Federer’s five consecutive US Open titles, it was Oudin, with her scrambling defense and powerful baseline game, who may be best reminded the tennis establishment that anything is possible under the bright lights of New York City.

With a never-say-die attitude and the support of a country behind her, Oudin made the most of her moment in the spotlight over an incredible 10 days that few people will quickly forget.

‘Believe’ was stamped on the heels of her custom sneakers, but it was a whirlwind performance written in the stars.