You’d think that would be obvious at this point. After all, the 31-year-old has twice won the US Open (2010 and 2013, beating Novak Djokovic both times), when the court was thought to be playing lightning quick. And he has won 16 hard-court titles in his career.

So it’s a little surprising that some believe Nadal is an underdog, or underwhelming, on this surface. Others describe him almost derisively as the “King of Clay” – as though that were all he is.

Even if you took away his record-setting 10 titles at Roland Garros, Nadal would still own five Grand Slams and a total of 16 hard-court trophies.

In 2013, the year he last won the US Open, Nadal said, “if we pull out all my clay-court titles and just analyze my career outside of clay, I had a much better career than I ever dreamed.”

True, it has been three years since the Spaniard last won a title on hard courts (Qatar in January of 2014). Since then, Nadal has played 34 tournaments on hard courts, making the finals of eight.

Earlier this week, Nadal rejected the possibility that conditions at the US Open might favor a Roger Federer or Juan Martín del Potro – Nadal’s semifinal opponent. The top-seeded Spaniard refused to accept that he is necessarily at a disadvantage.

Speaking of Federer, Nadal explained: “Of course he had a lot of success here. I think I had success, too. I already played, I don't know, six semifinals here? Of course is not a bad record. So I think it's a tournament that works well for both of us. Of course, on hard court, he's a little bit more specialist than me. That's it.” 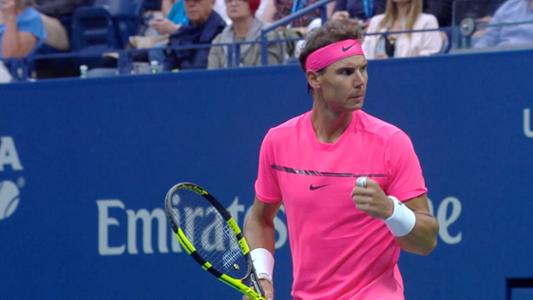 Hard courts will never be Nadal’s favorite surface. That will always be his native clay, to which his game is so naturally suited. But like few others, Nadal has continually tweaked his game, adapting it to compete and win on a surface that began as a challenge.

When Nadal roared to prominence in the game, as an 18-year-old in pirate pants and a sleeveless shirt in 2005, he was unstoppable on slow South American and European red clay, quickly amassing six titles.

Few expected the kid with the defense-oriented game and high-bouncing, loopy topspin shots to find success on grass or fast hard courts.

Nadal has defied those expectations. He labored to find ways to tailor his game to excel on grass, where he and Federer produced two classic finals. And Nadal has done something similar on North American hard courts, including the US Open.

Nadal is aiming for a third championship in Flushing. If he hasn’t secured more, it’s not because his game doesn’t work on the surface. It’s because Federer, Djokovic and Murray, primarily, are even better suited to hard courts. Too, Nadal has frequently arrived at the season’s last major depleted, after a long clay-court campaign and bundle of draining title efforts.

Yet Rafa has continued to find ways to recover, rebound and reconstitute his game.

Nadal’s improvement on hard courts was most dramatic in 2013. The Spaniard won titles at Indian Wells (beating del Potro in the final) and, in succession over the summer, Montreal, Cincinnati and the US Open.

For his career, Nadal is 408-124 on hard courts, a winning ratio of 77% (compared to 92% on clay). Federer, by comparison, has won 83% of his matches on hard courts and 76% on clay. Those, frankly, aren’t earth-shaking differences between perhaps the two greatest players in history – merely differences in their relative strengths. Just as the majority of Nadal’s titles have come on clay, the majority of Federer’s have been on hard court.

Though tierra batida is the surface on which Nadal has been most dominant, the Spaniard has continually tinkered with his game, especially in the last decade, to adapt it more successfully to hard courts.

Nadal doesn’t believe he has made major changes to his game. Merely “small adjustmen ts, if you can do it,” he said last week. “But the most important thing is play at my best level.”

Over his career, Nadal has largely evolved from the grinding style that suits him on clay. He has amped up the power and pace, playing more attacking tennis. He has pushed to hit both his first and second serves harder and flatter. He has sought to shorten points and play closer to the baseline, stepping in to take the ball earlier and rob his opponents of time.

Nadal has flattened out his backhand. While he has been cracking the sharply angled, cross-court backhand, it is usually the flat, down-the-line backhand that indicates how confident Nadal is feeling about his game. If he is ripping it up the line, he is able to create space and open the court for his forehand weapon.

Rafa’s return position is a critical factor. He looks to vary it, but for the most part return closer to the baseline. That hasn’t always been his tactic at this year’s Open. In the early rounds, Nadal was struggling with the timing on his returns, so he retreated deep in the court – very nearly a clay-court position. Now that Nadal appears more confident with his return and timing, look for him to creep toward the baseline.

This year at the US Open, Nadal is averaging over 112mph on his first serves and 96mph on his second. His fastest serve is 126mph. Those are good, aggressive numbers for Nadal.

With the forehand, always his big weapon, Rafa plays it with less margin over the net than he does on clay.

Had Rafael Nadal had never played a professional tournament in his life on dirt, he would still have a Hall-of-Fame career.

The world No. 1 has been uniquely willing to treak his game and work to improve, rather than stubbornly stick with something that has worked in the past.

“If you believe that already, you know about everything,” he said following his third-round match at the Open, “is tough to be enough humble, to work, wake up every morning, going on court and thinking about things you need to improve.”

“When you have a good talent, the most important thing is that you have the passion to improve every day and not consider yourself that good to feel that you [already] know everything.”

Most tellingly, he said: “I think I have the attitude.”

That, we would be fools to doubt.